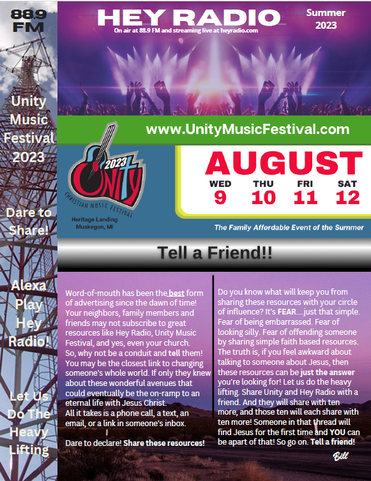 ​Bill and Teresa, his wife of over 30 years, raised their kids, Brad & Angie, right here in Muskegon. He totally understands what young people are up against when trying to live a Christian life in a world void of morality and full of pressure from their peer groups. He knows that the promise of eternal life through the salvation offered by Jesus the Messiah has rooted itself in the hearts of his children. That message is repeated in the music constantly, day after day over the air on 88.9 FM Hey Radio. That message is there for you too.
Pastor Bob Kuhn - Spiritual Authority and Board Secretary

Bob is a retired public servant, retired pastor, volunteer Biblical Counselor for Harvest Bible Chapel North Muskegon. He has been married to Marlene for 46 years. “ I grew up religious but came to Christ on a Cursuillo/DeColores weekend in 1978.”  Bass guitar player for a Christian Blues Band, Sons of Thunder, under the leadership of “Wild Bill” Erickson.
“God has a sense of humor when he takes a nerd engineer and finds a way to put him in a pulpit preaching God’s word.  Not that I am special; He used a donkey before He used me.  Love kids, and it’s a joy to reach them thru HEY Radio.”
Pastor Allen Alexander - Spiritual Authority and Board Secretary Emeritus

​​Allen came to faith in Jesus Christ at the age of 13. He's married to Diana and they have five children and 16 grandchildren. Allen is the Staff Pastor-Elder at CrossWinds Fellowship in North Muskegon. He has the joy of being one of the worship leaders at CrossWinds and loves music and singing praises to our God and Savior. He really enjoys being on the board at Hey Radio and working with such an outstand group of devoted believers in Jesus Christ and wanting to spread the Lord’s message in music.
Darius Pimpleton - Music Industry Authority

​Darius a fulltime professional musician from Muskegon, now living in Grand Rapids. He graduated from Western Michigan University with a major in music and a minor in business. Darius has been blessed to travel the world doing what he loves, serving God and playing music. Currently, he serves as Music Director at Revolution Christian Ministries in Grand Rapids. Darius also works as a studio musician and producer, while also teaching private piano, saxophone, and music theory classes in Grand Haven and Grand Rapids.
Brent Richards - Christian Artist Authority

A Muskegon native Brent (Poppa B) Richards has been involved with music at a very young age singing, acting and performing in church, school and community productions. He is an active musician in the area playing with multiple bands and churches. He has managed bands, stages and venues, served as a promoter, concert organizer, Front of House and Monitor operator. Brent owned and operated a live concert venue and recording studio. He has served at several festivals and currently enjoys serving as the A-Stage (Alternative Stage) Coordinator for Unity Festival, the largest Christian Festival in Michigan, and one of the top 10 in the country.

​“I am a follower of the creator of the universe and one true God Jehovah. Being part of Hey Radio allows me to pursue a life long goal; reach people where they're at, and people that say forget God or have been fatally wounded by God's followers and the church.”

Dave is a native of Muskegon, MI.  He spent his growing up years in West Michigan, attended Grand Rapids Baptist College after high school (Now called Cornerstone University), then got Married and went into full time youth ministry with his wife.  During College, Dave spent internships in youth ministry and Dave & Carole Nordstrom have spent the last 40 years in Outreach Youth Ministry together.  They worked with Youth For Christ for 30 years and 5 years ago began an independent ministry called “Make A Difference Ministries” with a High School outreach program called M.A.D. House.  Dave and Carole also own and run a Screen-printing & Embroidery business called D.C. SHIRTS.  They designed this business to especially help other ministries afford print wear for their ministries.  They are the parents of 3 daughters that they adopted as babies and 6 living grandchildren and one graduated to be with Jesus.  Dave and Carole still work full time in youth outreach ministry and Dave feels it’s an honor to serve on the HEY RADIO board that ministers thru music in unique ways.